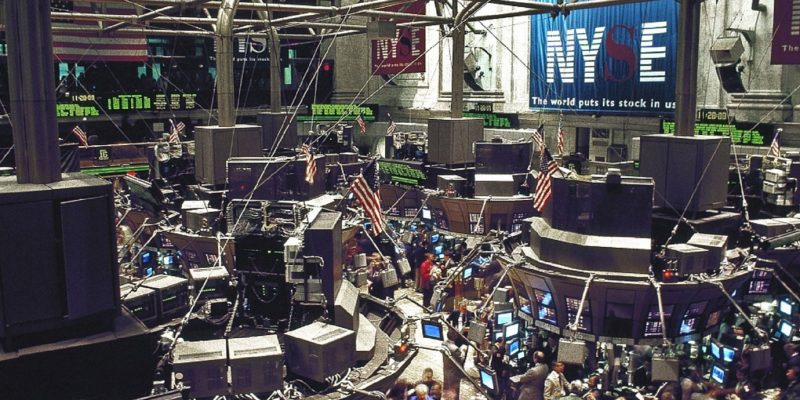 1. Dow set to drop after hitting an intraday record

Southwest Airlines on Thursday reported a third-quarter profit thanks to a boost from federal payroll aid. However, excluding one-time items, the carrier posted a per-share loss of 23 cents. Revenue was also better than analysts had expected. Southwest earlier this month canceled more than 2,000 flights, blaming the issues on bad weather in Florida and air traffic control issues compounded by staffing shortages. The airline said the cancellations and customer refunds cost $75 million. Shares of Southwest — up just 6% this year — rose slightly in the premarket.

Pilots talk as they look at the tail of an American Airlines aircraft at Dallas-Ft Worth International Airport.

American Airlines on Thursday reported a profit for the third quarter thanks to federal payroll support. Excluding one-time items, American posted a loss of 99 cents per share. Revenue for the quarter was also better than expectations. Shares of American — up nearly 24% in 2021 — gained 1% in the premarket.

A Tesla car charges at a Tesla Supercharger station on April 26, 2021 in Corte Madera, California.

Shares of Tesla — up more than 20% in 2021 and up 100% over the past 12 months — slipped 1% in Thursday’s premarket, the morning after the electric automaker reported third-quarter earnings and revenue that best estimates. Tesla delivered about 73% more vehicles than it had in the same quarter a year ago. Despite citing a variety of challenges, including semiconductor shortages and rolling blackouts, Tesla reiterated prior guidance that it expects to “achieve 50% average annual growth in vehicle deliveries” over a multiyear horizon.

4. WeWork to go public in a SPAC deal at much lower valuation

WeWork is set to start trading as a public company Thursday, two years after its much-anticipated planned IPO imploded due to investor concerns over its business model and founder Adam Neumann’s management style. After Neumann was ousted, Japan’s SoftBank, already a major investor, bailed out the teetering WeWork. In March, the office-sharing company agreed to merge and go public in a deal with special purpose acquisition company BowX Acquisition. It values WeWork at $9 billion, a far cry from its steep valuation in 2019 of $47 billion.

Homepage and app announcement of “Truth Social”. Former US President Donald Trump wants to start an alternative social network. Apart from the announcement, however, there is not much to see yet.

Former President Donald Trump announced Wednesday he will be launching his own media network, including a social media platform. The app appears to be the first project of the Trump Media and Technology Group, which will go public through a SPAC merger with Digital World Acquisition. That’s according to an announcement tweeted out by spokeswoman Liz Harrington. Trump, while president, was notoriously banned by major social media giants earlier this year, following his posts related to the Jan. 6 riot at the U.S. Capitol.

— Reuters contributed to this report. Follow all the market action like a pro on CNBC Pro. Get the latest on the pandemic with CNBC’s coronavirus coverage.